On September 17th 2017 Smash Wrestling travelled back to the Franklin Horner Community Centre in Etobicoke for a pair of exciting shows to celebrate their centennial day. From The Ground Up had the enviable premise of showcasing young, up and coming talent in the Ontario, and nearby, independent wrestling circuit. It was the opener to their 100th show, which was sold as a secret with no matches announced, and looked to draw in the dedicated Toronto indie wrestling fan base with the prospect of some never before seen match ups and fresh faces in a Smash ring.

This match worked well as an opening bout, with its downside being some awkwardness in execution and choreography that held it back from being a stronger outing. Blanchard started off like a gunshot, hard and fast, displaying good aggression and hitting hard with strikes and a springboard double stomp to Young Myles’ back. Young Myles, the moment he was given an opportunity, responded with a dive.

Both men had some ups and downs in the match. Young Myles’ strikes were garbage at times, but his suplex chains were cool and crisp. Blanchard aimed to toss Myles into the turnbuckle with a Razor’s Edge but miscalculated his spacing and it didn’t quite work. Both men telegraphed too much what they were doing, making it too obvious that it is a staged performance. Regardless, they had pretty decent chemistry working together. In the end, Young Myles would show off his cool move set, including a solid Michinoku Driver, and get the win off of a Meteora type move, Interestingly, Young Myles reminded me a bit of Trent Beretta with his high-flying and technical move set paired with his tall and somewhat gangly build.

Match 2 – The Kevin Bennett Experience (Big Tank and The Muscles) vs. #TheBest (Spunk and Logan Reid)

This match, regrettably, didn’t fare better than the opener. #TheBest are the more athletic, better dressed, and, I believe, more experienced of the teams. My criticism of the match doesn’t fall on booking decisions or psychology as much as it does on the weak execution. Big Tank has his strengths and weaknesses as a young performer put very clearly on display during the outing. He did not convincingly punch or body slam anyone, but his chops were good (and, therefore, should make up more of his offense). Mostly it seemed he got over with the audience based on his size, which is undeniable, and his connection with the Kevin Bennett Experience. I’ll give credit where it is due, he has addressed his lack of decent ring gear since this event.

The match itself was well structured babyface vs. heel tag team work, with the Kevin Bennett Experience focusing on isolating Logan Reid. #TheBest fight back and Spunk hits a nice high speed knee strike and a monkey flip but, in the end, Tank comes in illegally and takes out Logan to set up the Kevin Bennett Experience for their first win as a tag team. 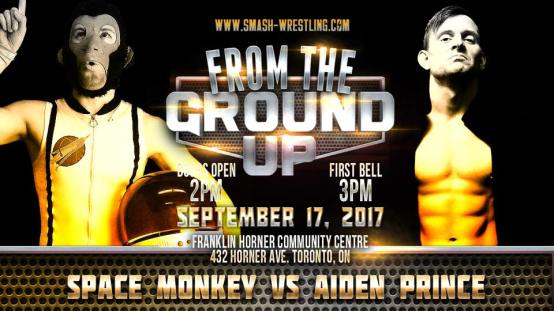 Every one needs more Space Monkey in their life! Official Promotional Match Graphic from Smash Wrestling

Before we get serious, take a moment to imagine the spectacle of people showering space monkey with bananas upon his entrance. That was a good moment, wasn’t it? Now then: Good storytelling served to patch up some weaknesses in execution throughout this match. Early technical displays quickly faded out to some good switcharoo comedy spots involving the referee, which made me smile. Of course, Aiden Prince robbed the audience of their smiles when he intentionally brutalized the Space Monkey. Prince took particular pleasure in punishing the primate’s tail. Throughout the match the heel would return to torturing Space Monkey’s additional appendage, causing him great harm. The dedication to the gimmick both men worked with was tremendous.

As the match builds to a climax the mutant Monkey eats a banana to recharge after escaping from the peril of Aiden Prince and hulks up, even getting in a big boot. Aiden prince takes the comedy pratfall on the banana’s peel, popping the audience right proper. A bit of miscommunication, however, dulls the ending to a cool athletic sequence. Prince has some really cool moves in his repertoire but his execution leaves something to be desired. Prince tries to monkey flip the Space Monkey but gets monkey flipped himself and lands hard on the turnbuckles. This set’s up Space Monkey to whip Prince in the face with his tail and pick up the win.

This match featured a lot of really good action at an elevated pace, particularly compared to the previous match. Regrettably, it doesn’t make up for the fact that there were a good number of botches that approached being dangerous and detrimental to the performers health at times. A top-rope Spanish fly botch genuinely made me worry for the health of the men involved. It’s never good to be yanked out of the illusion in such a way.

With that in mind, Matt Angel and Kobe Durst both put forth a lot of effort and have their own innovations to add to the pro-wrestling world that makes me hope they continue to develop into more well-rounded, experienced performers. Angel countering an attempted back body drop by leaping into a double-foot stomp to the back of Durst’s head shows some nice new thinking, and spots like that were rather big highlights of the match. Kobe Durst picks up the win off of a nice piledriver that capped off a hard hitting back-and-forth sequence. 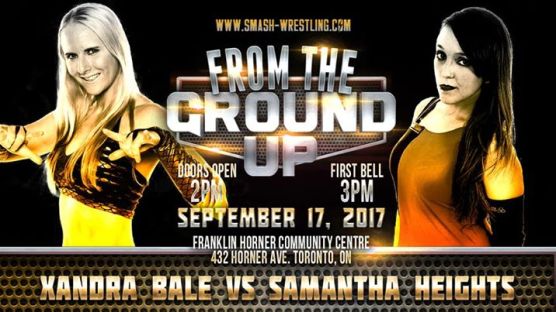 Really wishing I had taken my own pictures at this event! Official Promotional Match Graphic from Smash Wrestling

This match never really seemed to get its feet underneath it and the two combatants lacked chemistry with each other. Samantha Heights excels at the smack talk part of wrestling and was very entertaining, but regrettably this didn’t lead to an improvement in the quality of this match. While both competitors showcased some nice technique at times, Heights botched a cutter of some kind badly at one point, which wasn’t unforgivable. However, afterwards an awkward corner spot dragged on for far too long and something got botched badly in it. I couldn’t tell who was at fault but it looked a mess. In the end Xandra Bale picked up the submission victory with a spinning octopus hold like move. 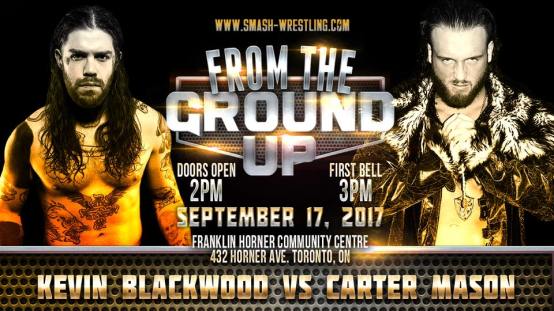 This was the kind of hard fought back-and-forth match that you’d expect from two warriors each trying to earn the respect of the other. The early part of the match saw the men trading advantage back and forth amid dropkicks galore and brawl to the floor. Both men’s strengths are highlighted and they are presented as evenly matched. A great early moment involved Mason maintaining control of Blackwood in a scissored sleeper hold and preventing his prey from escaping the hold, quickly adjusting and locking it in a second time.

The match isn’t without its faults, as demonstrated by this overlong corner sequence where Blackwood searches for a suplex out of the corner but Mason blocks his attempts. It dragged on for too long and, most regrettably, had no big move payoff. In the end, after knocking Blackwood away, Mason just hops out of the corner and goes back to working like he had never been on the top turnbuckle. Thankfully afterwards the two men do kick it into the next gear with a huge strike exchange that puts both men down and pops the crowd hard. Carter Mason hits Blackwood with some seriously good offense, big move after big move, but can’t put Blackwood down. In the end, Blackwood picks up the win with a pumphandle driver variation.

This match was presented in a very fun, competitive manner which bolstered my enjoyment significantly. The fact that Carter Mason isn’t more frequently seen in a Smash ring kind of baffles me, and I hope he makes further appearances with the brand. Blackwood is certainly no slouch either and, in the months since this event, has looked increasingly good in the ring.

For a show whose whole purpose was to highlight a new, upcoming crop of talent to new eyes, From The Ground Up was a smashing success. The matches herein may have been rated rather poorly, in some regards, but that is because I try to keep a relatively consistent scale to my grading and it is obvious that less experienced performers are going to make mistakes and be scored worse. The show at no point dipped below a quality threshold where I could not see the potential for these men and women to grow and become much better performers. In fact, I hope that I get to see these men and women more often. Furthermore, as a lead-in to the secret show, it served as a remarkable opening act that carried the promise of hopefully seeing some of these folks at a future anniversary celebration.